In recent years, brands have seen a dramatic change in their approach to marketing campaigns; gone are the simple pleas to buy a product, and instead we now have a plethora of new campaigns that gain traction by daring to be different—and really knowing their audience.

2021 has seen no shortage of impressive marketing campaigns, whether it’s through TikTok videos, humorous tweets or intriguing billboards. We’ve compiled a list of a few of our favourite campaigns that sought to do things a little differently. Here’s to another year of creative marketing!

McDonald’s saw a change in direction over the past year, both in the form of their marketing and their partnership with Uber Eats, and their latest campaign promotes the all-new delivery system.  A far cry from the days of Ronald McDonald, the campaign took a more minimalist turn and in this case, less is definitely more. Maintaining the iconic yellow ‘M’ that we know and love, the rest subverts expectations with bold colours and simple messaging—because the main thing McDonald’s needs you to take away is ‘we deliver.’

John Lewis’ adverts have become somewhat of a cultural icon, with many eagerly anticipating them each year. So, it was only a matter of time before other brands created their own ‘John Lewis’ parody…only TikTok style.

It’s not news to anyone that TikTok is the next hot thing in marketing, and we’ve seen many brands jump on the bandwagon throughout 2021. Heinz’ recreation of the iconic John Lewis advert is comedic, clever and simple. Not to mention, it reaches an audience who are consuming media through their phones more and more. 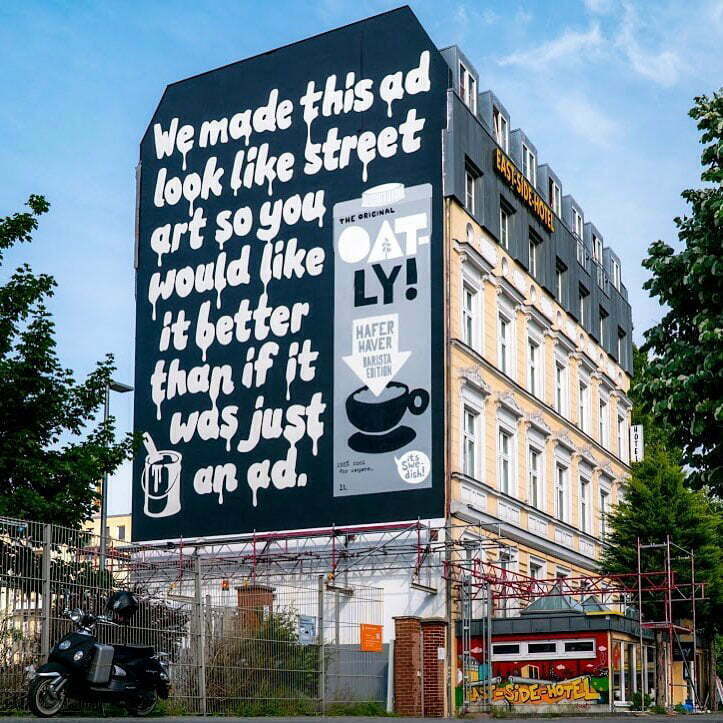 Compared to TikTok, billboard adverts might seem a little so five years ago, but the power of billboard marketing is still as important as ever—especially when it’s the kind of poster that garners a lot of social media attention.

Oatly got it right with their array of billboards. Instead of blatantly advertising their product, Oatly leaves plenty to be intrigued with their candidly self-aware adverts which basically say what most of us are thinking—who wants in-your-face advertising?

This works on plenty of levels; it implies intelligence from the consumer and pins the brand as one that knows just what its audience wants, and it generated a lot of buzz online. This form of advertising doesn’t aim to push the consumer to buy its products, instead it creates brand awareness and promotes the company on a much larger—and more memorable—scale.

The battle of the burgers continues, as McDonald’s is not the only fast-food chain to undergo a change of direction in marketing campaigns throughout 2021. Burger King wanted its consumers to trust the company more and believe the claims of no artificial preservatives—but merely telling the public wasn’t going to do much good. Instead, Burger King updated its logo, changed its brand colours and opted for a more relaxed and down-to-earth style of messaging. The end result is a more unified and professional look that maintains an air of fun and self-awareness, which deeply resonates with its audience.

The Cuthbert vs Colin War

Who’d have thought a birthday cake would cause so much havoc? You likely remember the saga between Aldi, M&S and their respective caterpillar cakes, but as a little reminder: Aldi produced its own version of M&S’s ‘Colin the Caterpillar’ cake named Cuthbert. M&S didn’t take to this very well and threatened legal action. Instead of recoiling, Aldi went to social media, creating memes and even starting ‘#FreeCuthbert’ amongst the Twittersphere. As a result, Aldi’s playful approach won them plenty of positive attention, with the majority of the public siding with them.

While this is perhaps less of a campaign and more of a reactive marketing effort, it worked wonders for Aldi, and pinned them as a brand a modern audience can relate to.

We’ve discussed the advantages of utilising social media and creating viral content, but sometimes what your audience wants is a simple advert. Few know this as well as Guinness, who’s advertising campaign, ‘Welcome Back’ honed in on its target audience. Short and sweet, the humble advert celebrated the moment pubs were reopening by juxtaposing lockdown-era imagery with clips of friends laughing over a pint of Guinness.

There’s much more going on here than initially meets the eye; the brand is associating itself with positive memories while playing on the feeling of isolation we’ve all suffered through throughout 2020. Ultimately, it proved the brand knows exactly what its audience wants.

Feeling inspired? Get in touch at [email protected] to see how the Digital Glue team can boost your marketing efforts.

If you want to see more exclusive news and tips from Digital Glue, sign up for our monthly news bulletin or head to The DG Blog.

This website uses cookies to improve your experience while you navigate through the website. Out of these, the cookies that are categorized as necessary are stored on your browser as they are essential for the working of basic functionalities of the website. We also use third-party cookies that help us analyze and understand how you use this website. These cookies will be stored in your browser only with your consent. You also have the option to opt-out of these cookies. But opting out of some of these cookies may affect your browsing experience.
Necessary Always Enabled
Necessary cookies are absolutely essential for the website to function properly. These cookies ensure basic functionalities and security features of the website, anonymously.
Functional
Functional cookies help to perform certain functionalities like sharing the content of the website on social media platforms, collect feedbacks, and other third-party features.
Performance
Performance cookies are used to understand and analyze the key performance indexes of the website which helps in delivering a better user experience for the visitors.
Analytics
Analytical cookies are used to understand how visitors interact with the website. These cookies help provide information on metrics the number of visitors, bounce rate, traffic source, etc.
Advertisement
Advertisement cookies are used to provide visitors with relevant ads and marketing campaigns. These cookies track visitors across websites and collect information to provide customized ads.
Others
Other uncategorized cookies are those that are being analyzed and have not been classified into a category as yet.
SAVE & ACCEPT
Powered by